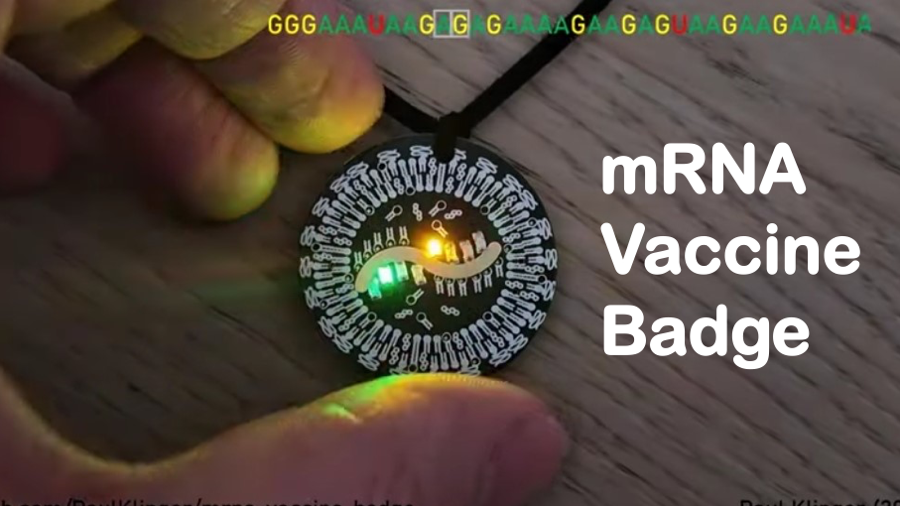 Since the start of COVID-19 in the first quarter of 2020, the need for vaccines has remained very important. Although vaccines were not developed in the early months of the year, different scientists and innovators got to work to develop vaccines with minimal side effect for Americans and the world. Since then, mRNA vaccines have evolved into a tool to combat the medical challenge and pandemic that has struck the human populace. While some scientists created vaccines, someone has created a badge that shows the sequence of mRNA vaccines.

An innovative electronics hobbyist on Reddit has created a tiny but shiny badge that reveals a formula of an mRNA vaccine nanoparticle. The shining part of the badge represents the RNA sequence of Pfizer vaccines or Moderna vaccines. There is an activator to switch between either vaccine for their sequences. This badge is reminiscent of the very popular circuit playground.

As one of the ways to show information of mRNA vaccine sequence, the RNA for Moderna and Pfizer vaccines is sourced from the assemblies of vaccine sequences which have been published on Github and Pubmed before. The publication is motivated by the lack of sequences, although the RNA species have been shared across the population they’ve had access to. Creating access to this sequence information is thus regarded as a means to help medical and public health analyzers as well as lab scientists in designing nucleic acid surveillance tests which would help in identifying an infected person and a vaccinated person.

The Reddit user Almoturg, uses software such as Python, Javascript, and Java with the combination of PCB designs, CAD tools, embedded programming, and other tools for his projects.

The front side of the small badge has the schematic formation of the mRNA particle. The object is also built with lipid shells. The blinking lights are the sequence of the vaccines. A complete RNA sequence takes 10 minutes to complete display as it is 4000 nucleotides long.

Behind the badge is an ATiny1617 microcontroller which the project owner says he chose it for cost-effectiveness. The badge also has a start and menu button while the coin cell has the face of Christopher Ironside. Paul Klinger had used the UK’s Fifty Pence coin designed in 1969 to make the badge fit and usable.

The badge’s blinking light has the colors green, blue, red, and yellow on it. Paul says it has a standby current draw which can last for as long as you use it. You can see the Reddit thread for a video and details on how the badge works.

Projects like this one are at the intersection of art, science and engineering. Creating them can be a lot of fun and a great way to learn. It requires a lot of skill to solder an ATtiny1617 onto a printed circuit board. This part has leads which are under the IC and as a result using a soldering iron may not be adequate. You might need a hot plate like this one.

Also working with an ATtiny chip will introduce you to embedded and microcontroller programming A gentler introduction to this might be with an Arduino kit.

In conclusion, a very interesting, educational and relevant project in these pandemic times.

SE-Instruments is reader-supported. As an Amazon Associate I earn from qualifying purchases. Thank you for your support.