Review of the TS80P Soldering Iron 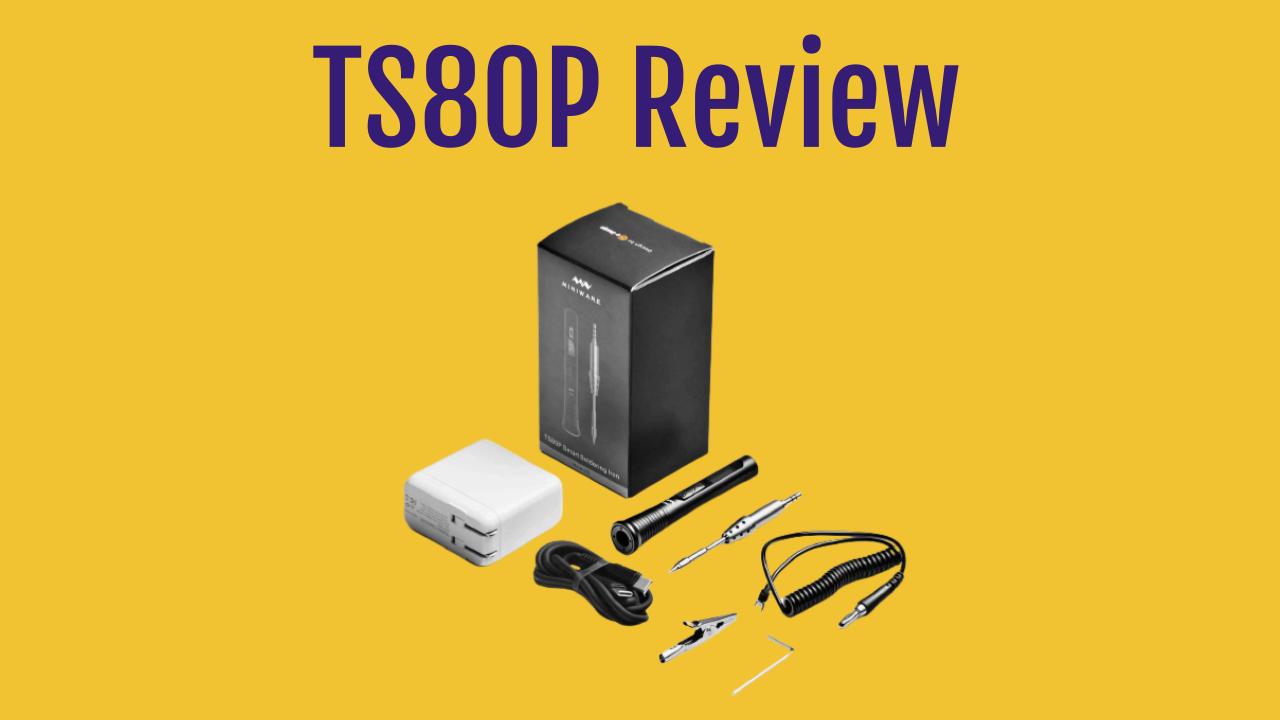 Recently I realized it was time for me to replace my own soldering iron. For years I had been using a Weller WLC100 soldering station, and it worked great! This is a very popular soldering iron, they even have one in the Smithsonian! If you aren’t sure what kind of soldering you want to do, or you do a variety of different kinds of soldering, I strongly recommend this station. Mine is second hand and has served me well for about 8 years.

When I was looking for a new soldering iron, I had a couple things in mind. The first was I wanted a small soldering iron, with a fine tip. I like to solder a lot of SMD components, and I needed a soldering iron that made that easy. I also wanted it to be fairly portable, I am a university student who likes to attend hackathons which means when I am soldering, it isn’t always at my desk, so being able to easily carry around my soldering iron is important. Lastly, I am left handed! So the soldering iron, or station, needs to not be set up for a right handed user, I have accidentally melted a lot of cables because of the way most soldering irons are designed, so I was hoping to find one that didn’t have this problem.

Eventually I settled on the TS80P. After reading many reviews, I decided it was for me! It is the newer version of the TS80 soldering iron with a couple convenient additions since the previous model, like a quick release slider for the tips making them easier to remove when hot. It is even open source! Which is always a good plus.

Now that I have been using the TS80P for a couple months, I can say it was certainly the correct choice. It is an excellent soldering iron, and a really good choice for what I do.

The first thing I noticed about the soldering iron is it’s build, they advertise it as being made from a CNC aluminum enclosure, and it definitely is! It feels very nice in the hands, and feels very well built. I was very impressed with the size and weighting of it the first time I picked it up.

The other benefit is its size, it truly is the size of a pencil. The small size and weight of the soldering iron, paired with the USB-C connector that it uses for power makes it very portable. You can use the same adapter for your computer, phone, tablet, and soldering iron! I still carry the included power adapter and cable, the included cable doesn’t melt when touched with the soldering iron, which is very nice. I am able to fit everything I need to solder in a small pencil case that I can easily throw into my bag when I need it.

The TS80P also heats up very quickly, like 7 seconds quickly, which is a little mind blowing if you’re used to waiting 5-10 minutes for your soldering iron to heat up. The narrow tip that was included is also more than precise enough for the SMD work I have done with it, but wide enough for most other applications, I have found it to be a good general purpose soldering iron tip! Which is good considering one of the main drawbacks of this soldering iron, the price of the tips. Each tip costs about $30, which is quite a bit compared to the competition. I almost didn’t buy the soldering iron for this reason. For me it ended up working out well, because I only ever use one tip on my soldering irons, as do most people, but if you are someone who needs a wide variety of soldering iron tips for the work you do, this soldering iron can be very expensive!

I had also heard some concerns about the soldering iron heating up after extended use. I tested this by soldering connectors for a couple hours with it, this was something I needed to do for a project, and found the enclosure warmed a little, though I couldn’t tell if it was because I was holding it, or the iron was heating itself up, so this is definitely not an issue! If you need your soldering iron to run all day, perhaps it will be more of an issue? But in that case I recommend a proper station, this soldering iron is definitely better suited for smaller work, it is after all a portable soldering iron.

One of the things I like most about it is how easy it is for me to use as someone who is left handed. Because there is no station, the cable doesn’t get in the way, and even when it does it doesn’t melt, so that fixes that problem! The small screen on the soldering iron also has a left handed mode which flips the text so you don’t have to read upside down when using it in your left hand. This little addition has made it so much easier to use.

The TS80P is an excellent soldering iron, and I am very happy with my choice! If you have similar needs as I do, and are looking for a very high quality tool, this is the soldering iron for you. If you still aren’t sure, luckily this soldering iron is very popular so there are many more reviews to read to help you make a decision. It ended up being the right decision for me, so hopefully it also is for you. Happy soldering!

SE-Instruments is reader-supported. As an Amazon Associate I earn from qualifying purchases. Thank you for your support.